Parent & Carer Guide   |   Latest News   |   Picture News: Should we be allowed to swim with dolphins?

Picture News: Should we be allowed to swim with dolphins? 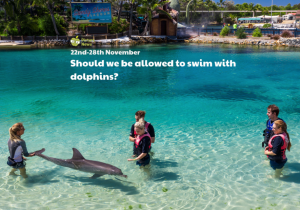 In next week's Picture News we will be asking the important question: Should we be allowed to swim with dolphins?

Travel company, Expedia, has banned the sale of holidays involving dolphins and whales. The decision follows calls led by public figures such as Joanna Lumley and the Prime Minister’s wife, Carrie Johnson, for an end to holidaymakers swimming with captive creatures or watching them perform tricks.

Things to talk about at home…

Share what you know about dolphins. Have you ever seen a dolphin? This could be either on television or in real life.

Talk about the recent decision to ban holidays where dolphins and whales are involved in shows or for holiday makers to swim with. Why do you think they made this decision?