Picture News: Does music have to power to change our behaviour? 17.5.21

Sing2G7, an ambitious project aiming to give children a voice ahead of the upcoming G7 Summit, have recorded a song at Truro cathedral. The song, titled Gee Seven has been written by Sir Tim Rice and composed by Peter Hobbs, aims to put children’s voices at the heart of the upcoming summit which opens in Cornwall on 11th June.

The G7 (or Group of Seven) is an organisation made up of seven of the biggest economies, Canada, France, Germany, Italy, Japan, the United Kingdom and the United States. The group considers itself as "a community of values".

This week's British value is DEMOCRACY. 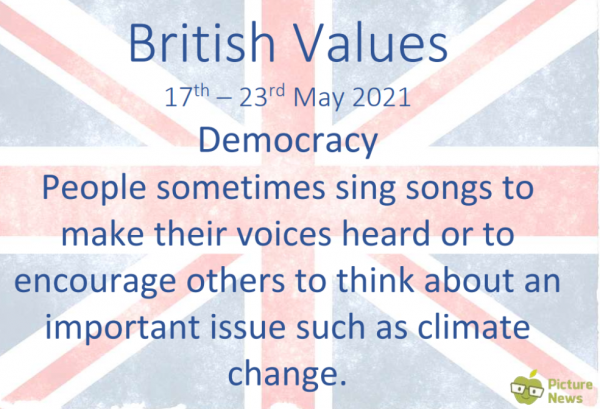 Things to talk about at home:

Why do you think a message in a song might be more powerful than a message in a letter?
If you could speak or sing directly to the world leaders, what would you want to tell them?
Do you think world leaders should listen to children rather than just to adults?
Think about the type of music you like; how does it make you feel when you hear it?

View the Picture News virtual assembly and much more here: