Picture News: Do we need to create a virtual universe? 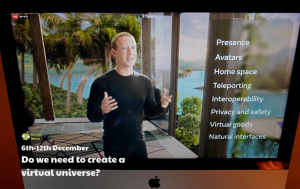 This week's Picture News is discussing whether creating a virtual realities is a good thing or a bad thing?

Facebook founder, Mark Zuckerberg has announced Meta, a new company brand for Facebook apps and technologies. Meta recently declared that they’re changing direction from developing social media platforms to building what they’re calling the next version of the internet. They’ve described the metaverse as a way of using the internet through virtual reality (VR). Instead of being on a computer, the concept means the user would use a VR headset to access websites and interact with other.

Things to talk about at home…

Have you ever used a virtual reality (VR) headset? How do you think using a VR headset may change how we experience computer games and forums?

In the future, do you think you would like to have a virtual life?

What do you think are the benefits and drawbacks of having a metaverse?